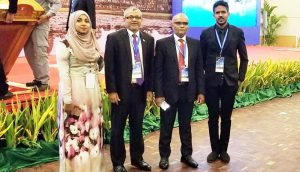 This year’s edition of the Summit, which is being held in Siem Reap, Cambodia, from 12th – 14th June, are attended by over 600 broadcasting stakeholders from 40 countries.

At the Summit, broadcasting stakeholders would deliberate, share experiences and views on the theme “Digitization: Media Credibility”. During the Summit, Commission president delivered a presentation on the perspective of Maldives in context of the theme.

In the sidelines of the Summit, the Commission President also met with heads of media organisations from various countries and discussed on the opportunities available in their countries for media training and human resources development for Maldives broadcasting sector.

In addition to Commission president, the Maldives delegation at the Summit consisted of Deputy Managing Director of PSM, Mohamed Shameem and two other media officials from the station.