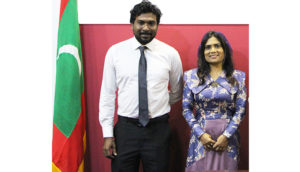 Election for the posts were held, in a meeting at the Commission this afternoon with sitting members and with newly appointed members present.

The posts have been vacant since the resignation of the then Commission president, Mohamed Shahyb and vice president Ismail Sofwan.