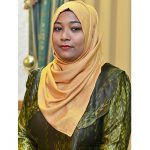 Commissioner Fathimath Zaina has been elected as the new Vice President of Maldives Broadcasting Commission.

Ms Zaina was unanimously elected to the post, at the Commissioners meeting held today to elect a VP, following the resignation of Broadcom Vice President Ismail Sofwan from that post on 13th June 2019.

Ms Fathimath Zaina was elected as Commissioner for a five year term of office by the People’s Majlis and appointed by the President of Maldives, on 5th April 2016.