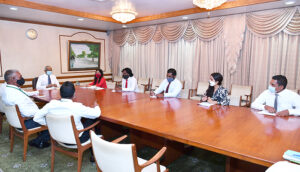 Maldives Broadcasting Commission members has held a discussion meeting with President of the Maldives, Ibrahim Mohamed Solih, regarding challenges in administration due to budget limitations and on the importance of revising the Broadcasting Act to further expedite the legal responsibilities of the Commission.

Commission members requested from President Solih to facilitate and fast-track support through relevant government offices to overcome the challenges the Commission is currently facing.

During the meeting, Commission members briefed President Solih on a number of sector development projects currently ongoing. Members shared information regarding the pilot project on community broadcasting and planned broadcast media training for local journalists in collaboration with Islamic University of Maldives.

Speaking at the meeting, President Solih gave his assurance that he would provide support through relevant government bodies to overcome the Commission’s concerns raised in the meeting.

Speaking on media sector development of the country, President Solih noted that Maldives has a high number of TV, Radio channels and online papers in operation, thus amplifying high level of press freedom in the country. He further highlighted that to take local journalism to a higher level, training journalists in media ethics and best practices of journalism are of utmost importance.